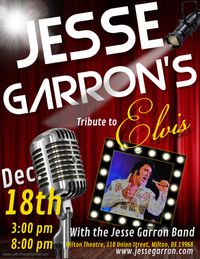 Doors open at 7. Show time is 8 pm. Tickets on sale now. Jesse Garron's Tribute to Elvis takes audiences on a musical journey into the concert years when Elvis Presley was the King of Rock and Roll. Garron’s uncanny ability to bring Elvis to life on stage has withstood over 20 years in the business and has evolved into a professional show with live musicians, female backup vocalists, and a genuine portrayal of Elvis in his heyday right down to the scarf serenades and standing ovations. Having performed for thousands of Elvis Presley fans nationwide, Garron continues to be ranked “The Closest Thing to the King” by fans and venues alike. This show is a special event featuring Elvis' holiday classics that are only performed this time of year.